Time is running out for Manyoni’s oldest lion male LM2

Time is running out for Manyoni’s oldest lion male LM2.  LM2 (nicknamed “Junior” when he arrived) is the grandfather of many cubs on the reserve and was one of the original three males introduced 10 years ago in July 2011.  Already older than 12, “Junior” is well into the upper average age of wild lion – competition from fellow apex predators is fierce, but LM2 is a wily old cat and has even teamed up with a former foe! 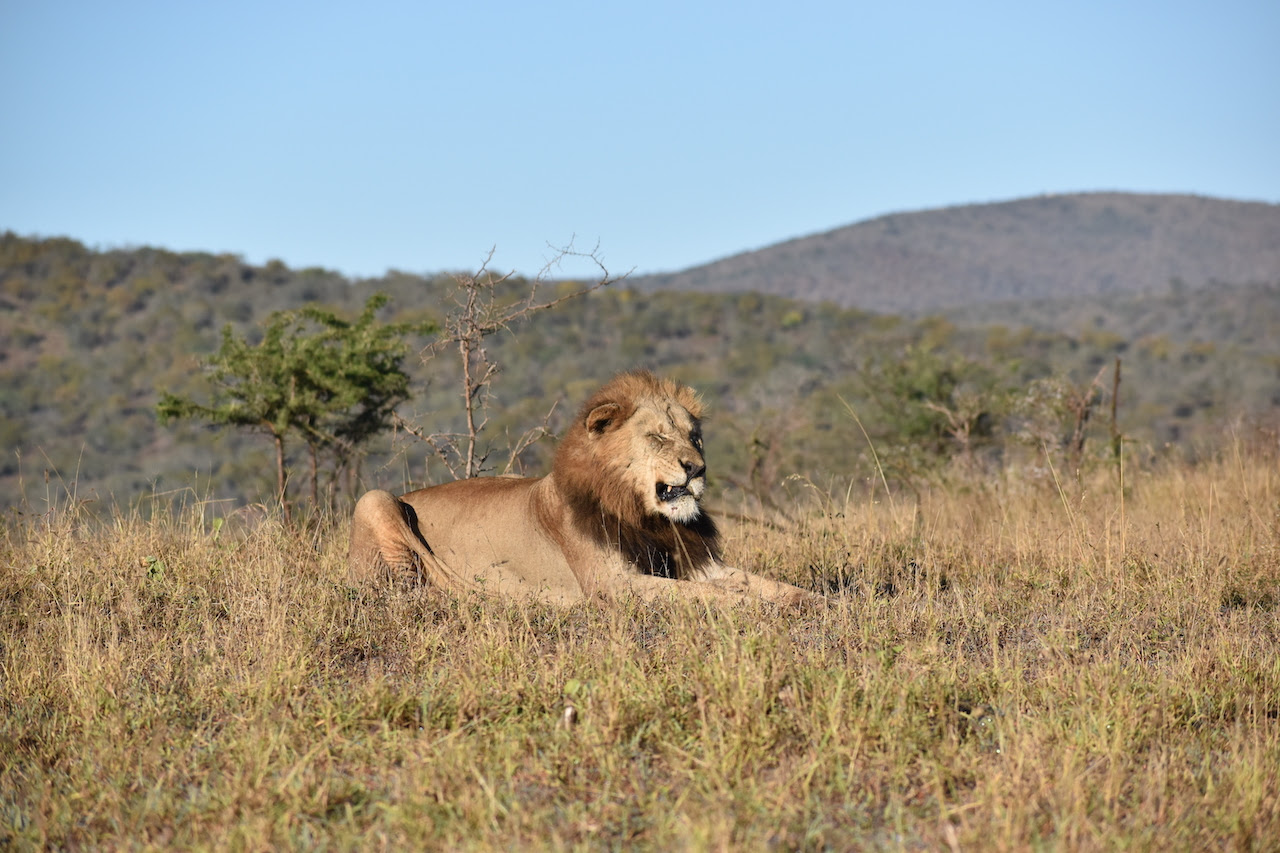 Bayete Zulu Lodge and other establishments on the Manyoni Reserve had mixed feelings about the introduction of lions. While it was fabulous to finally be a “Big 5” reserve, changes were instant. Bayete Zulu Homestead had to be fenced in after two males spent a morning napping on the grass in front of rooms seven and eight, which meant guests couldn’t come back after their game drive!

The focus of our game drives has also changed – with the lions taking centre stage. Only two years old, the three boys were just starting to grow their manes and took to climbing and falling out of the trees for better vantage points, which is a rare lion behaviour. As the original trio grew other quirks developed. Startled guests were treated to roaring displays as the boys yelled across the fence at the lions on a neighbouring reserve – while lying on their sides.

“Guests thought it was great, as they just wanted to see the lions, and we got more guests because of them.  Return visitors always asking if “Junior” is still around,” says ranger Julian who was already working at the lodge. “We could see the lions were relatively inexperienced – we watched them learning to make a kill using teamwork, at first it took three of them to kill a warthog who kept on backing in and out of its burrow.”

To improve the genetics of the Manyoni lions, a further two breeding males were introduced in 2016 – setting off a battle for dominance. Apart from killing cubs, not their own, lions will also dispatch any competition they can. “Junior” and one of his offspring LM7 ruled the South of the reserve.  Territory wars took the lives of LM5 and two of the original boys LM1 and 3. 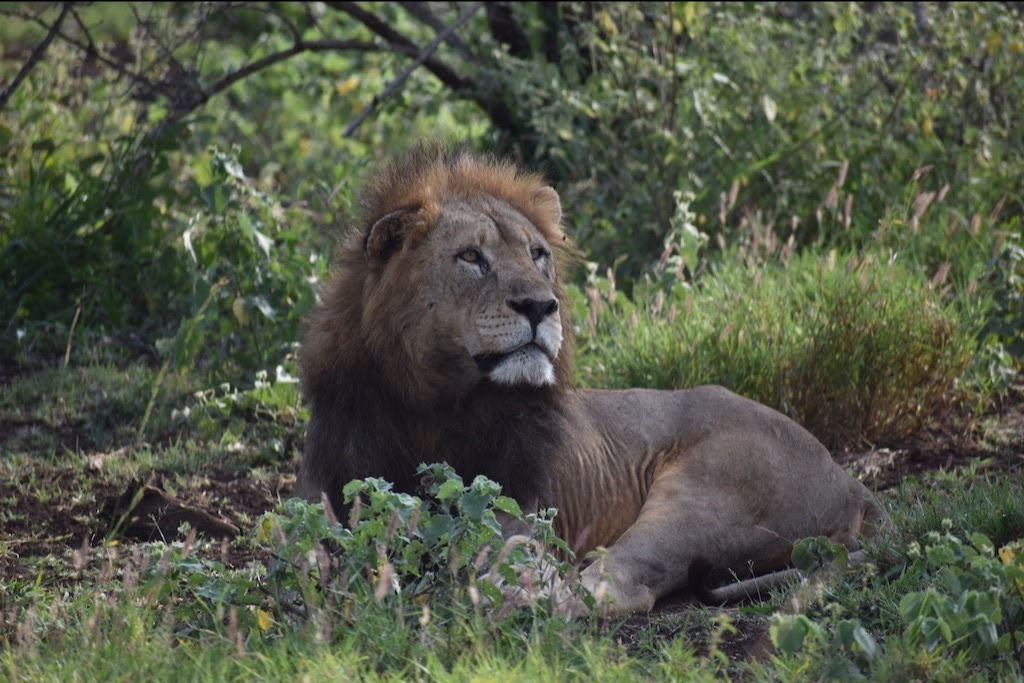 “Junior” is easily recognisable. His muzzle is now heavily scarred and his frame has started to shrink a little, but most noticeable is a twitch on his upper lip. “It’s a sort of a wink, he has this twitch,” explains Jordan. Since 2019 the north has been ruled by LM9 and 10, new large aggressive males who established themselves as dominant with the females on Manyoni.  It is ironic that since the demise of his son, “Junior” has teamed up with LM4 to hang on to territory south of the river, but rangers realise it won’t be for long. “He is basically just moving from warthog burrow to warthog burrow to eat,” says ranger Jordan.

Sandiso had an even closer encounter: “We were at the Beach, and I could see the fresh tracks, so I got out of the vehicle and jumped into the riverbed to see what direction he was going because it wasn’t clear.  And then he just sat up, there in the grass in front of me, not even 20 metres away.  I closely backed away to the vehicle where the guests were watching and got in again,” he says.  He is certain that only the lion’s old age saved him and his guests from a nasty surprise.

The lush grass in summer easily hides the lions, and in winter the yellow-grey dryness offers perfect cat camouflage. So when you visit next, ask about the latest lion sightings and the saga of Manyoni’s favorite grandfather, and if you manage to spot him, know you are in the presence of a legend. 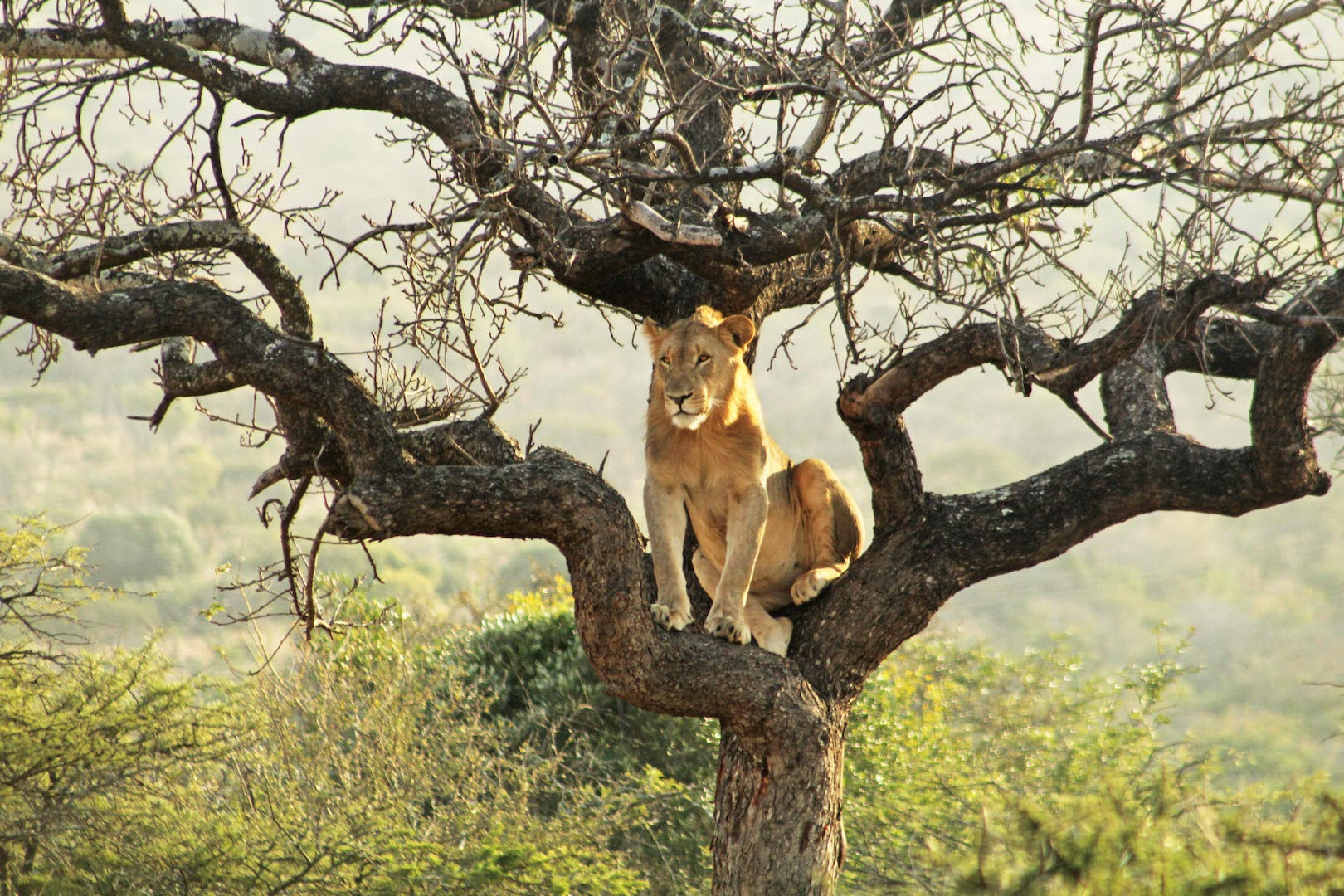 BOOK YOUR NEXT SAFARI

Zululand Conservation Trust is more than just a passion or a calling. It is a way of life.
We have made our home in the heart of the beautiful Zululand region. Here, we are dedicated to sustaining the land, conserving endangered species as well as uplifting local communities through partnerships, projects and programmes. To find out more click the link below.

In recent years threats to our animal populations such as poaching and drought, have risen not only in Kwa-Zulu Natal but on the continent. These crises continue to burden the conservation community, to the point that we rely heavily on the generous contributions of our partners and donors. If you would donate to this amazing cause follow the link below.

Follow Bayete Zulu Lodges, subscribe to our newsletter for more wildlife stories and updates on our animals.

Until next time,
Bayete Zulu Lodges

Ecstatic guests at Bayete Zulu were treated to incredibly close-up sightings of Wild Dogs this last month at Bayete Zulu!   The Siyavikela Wild Dog pack with its new youngsters spent a week on our property, after being brought back from a neighbouring reserve...

← Close-up sightings of Wild Dogs this last month at Bayete Zulu!
MAKE AN ENQUIRY / BOOKINGPlease complete the information below and reservations will get back to you.